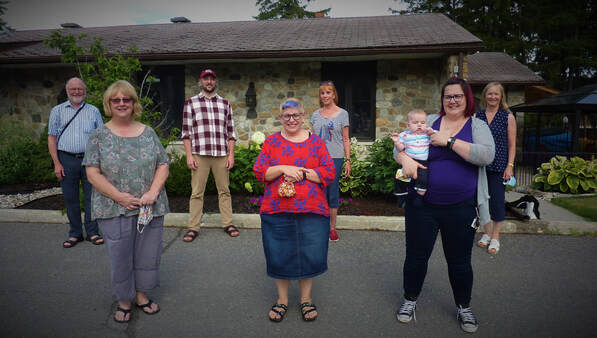 About the Search Process
Reverend Pat Guthmann Haresch will soon be leaving our congregation after completing her 3-year term as First Unitarian’s Developmental Minister.  The Settled Minister Search Committee has been tasked by the Board of Directors to find our next settled Minister, who will begin in August 2021. This year-long process started in Spring 2020, and involves many steps (see below for a list of these steps and their status).

Updates on the Search Process
On April 12, Rev. Eric H. Meter was announced to the congregation as the choice of the Search Committee.                 Dec 13, 2020:    Finding Stillness
Mar 13, 2021:      The Road Ahead     (Guest Minister at First U of Toronto)
April 4, 2021:      Practicing Resurrection
April-May 2021
April was full of a variety of activities intended to introduce Rev. Eric to all parts of the congregation – a period known as ‘Candidating Week’ – although because all of this had to be done virtually, the period was expanded to two full weeks. We kicked off Candidating with a ‘Fireside Chat’ conversation between Rev. Eric and members of the Search Committee. This was followed by over a dozen other meetings, some with specific groups, and others which were theme-based with broad attendance across the congregation. All of this culminated on May 2, with a live Zoom Sunday service led by Rev. Eric. This was immediately followed by the vote of the membership to overwhelmingly approve calling Rev. Eric Meter to be FirstU’s next Settled Minister.
Rev. Eric and his wife, Ann De Leon, hope to move to Ottawa by mid-summer; Rev. Eric will begin serving as our minister on August 9.

January - March  2021
The 4 Pre-Candidating weekends were completed in mid-March, and the committee spent time in reflection and discernment to decide which of the ministers would be the best fit for First Unitarian Ottawa. At the same time, the minister applicants were deciding their own preferences among the various congregations where they pre-candidated. The Transitions Office of the UUA – which has coordinated the entire minister search process for both the US and Canada – received the list of preferences from both the ministers and the searching congregations in late March, and on April 1 congregations were free to make offers to ministers.
Winter 2020
During December, prospective ministers prepared their extensive applications (known as Ministerial Records). In January, the Search Committee received 14 applications, which were each carefully reviewed. The committee chose 7 individuals to interview and reference check. After reflection, the committee chose 4 of these individuals to invite to Pre-Candidating. During February and March, each pre-candidate spent a ‘virtual 3-day weekend’ with the Search Committee, which included extensive interviews, group and 1-1discussions, a virtual tour of the FirstU building/campus, several social hours, and answering questions about housing/schools/partner jobs in the Ottawa area. Sunday mornings were devoted to a ‘neutral pulpit’ sermon at another Unitarian church, that was observed by the committee and discussed afterwards with the candidate.
FALL 2020
The focus of the Search last fall was on developing and analyzing the Congregational Survey, and developing the Congregational Record. In September and October, the congregation completed a detailed survey to help guide the Search Committee in what the congregation is looking for in their next minister. The summary of the survey results is available on the members page of the FirstU website.  One of the main ways for us to describe ourselves – both who we are, and what we are looking for in a minister - is a document called the ‘Congregational Record.’ On December 1, this in-depth document was made available to prospective ministers throughout the US and Canada. We believe it is important for our members to know the information we have shared, which was gathered through surveys, focus groups and interviews. The Congregational Record is available on the members' page of the FirstU website.
12 steps of the Minister Search
About the Search Committee
Selected by the Nominating Committee, the Search Committee is made up of 7 members. We are blessed to have a diverse group of women and men, younger and older, retired and working full-time, from various walks of life. The work of Search Committee has represented a team effort.
Picture taken at our weekend retreat on July 10-11, 2020.
Left to right: Phil Nagy, Mary Ella Keblusek, Mike Lloyd, Jodi McIntosh, Jane Lindsay (chair), Amy Bérubé (holding baby Evan who also attended our retreat!),
and Lena Talback